This is supposed to be a ride retrospective (and indeed it is in here somewhere) but this is also a bit of a retrospective of recent history.

On Saturday, July 27th I took part in my first century ride. Hopefully it will not be my last.

I was bit by the cycling bug last year when I started cycling to get into shape. Friends encouraged me to get into a century ride last year but I had to decline. I felt there was no way I would be physically able to do it, and I also felt like I hadn't studied cycling itself enough to be confident in what I was doing.

When I started I was in full Fred mode – hiking shoes, hiking shorts, cotton t-shirt. Over the course of the year things evolved a bit. I found cheap biking undershorts to wear, I wore wicking shirts, and I bought a pair of minimalist shoes to wear while riding. No clip-in shoes yet as I felt like I'd be spending most of my cycling time laying on the ground instead of up in the saddle.

By the beginning of this year I was ready for some changes to take things to the next level. With the generous help of family I upgraded into a newer bike with solid components. The old bike was shipped to my parents' home across the country so I could ride while out there. I found cycling clothes on the cheap (the pockets on the back of a jersey are insanely useful). Most of all I switched to a set of clip-in pedals and shoes. I've only fallen down three times this year!

As I started "training" in late March I began looking for a century ride to participate in and came across The Connecticut Challenge. The CT Challenge is an organization which "empowers cancer survivors to live healthier, happier and longer lives by creating and funding unique survivorship programs and research." Great, there are members of my family who have overcome cancer, and there are others who are dealing with the possibility of it.

Around the time I entered the ride my wife Lori was diagnosed as being positive for the BRCA2 gene mutation. It was a process of a couple years that led us to this diagnosis which I explained in the "charity beg" messages I sent out:


Cancer has been a frequent topic of discussion in our family. Over twenty years ago my wife Lori's sister was diagnosed with and treated for melanoma from which she is fully recovered. A handful of years later their mother was diagnosed with leukemia and against all odds beat it. She is currently in remission.

The BRCA2 gene mutation generally increases the chances of several different types of cancers including breast, ovarian, prostate and pancreatic. It is closely related to the BRCA1 gene mutation which made the news earlier this year when Angelina Jolie disclosed that she had a double-mastectomy after testing positive for this mutation. You can read the details about these mutations here.

A little over a month ago Lori underwent a hysterectomy and oophorectomy and is currently recovering. Lori's sister has already had a hysterectomy for other reasons. Both Lori and her sister are now evaluating their options with regards to having mastectomies.

In all I thought this would be a good ride to get involved in as it felt close to home, personal. So I "trained" all spring and summer, about 1600 miles worth.

On the eve of the ride we received the results of Lori's third breast biopsy in the past 18 months – positive for cancer.

On the day of the event all the riders assembled in the different staging areas with the hundred mile riders at the front to go first. The master of ceremonies gave us a word of advice – as you grind up one of those obnoxious hills remember the people you are riding for. During this little pep-talk I have to say it was hard not to lose it.

So, yes, about that ride retrospective. A little after 8am they let the hundred milers take off. The first segment (and by segments I mean the riding intervals between the aid stops) was flat and mostly about not running into each other. There were a lot of riders out on the road and I got a feel of what the peloton effect is all about. I was riding on adrenaline. Somewhere after the 15th mile the first aid stop showed up.

The aid stops were awesome – hydration, snacks, ice to cool you off, first aid, porta-potties and a bike mechanic.

The second segment was still all about the adrenaline but a handful of climbs starting working their way into mix. Still doing pretty well but I'm having to suppress the jerk-wad tendency in my head to race so that I don't fall into the dumb-wad trap of not finishing. The second aid stop appeared after the 34th mile.

The third segment I'd have to say was brutal. It felt like mostly climbing with a couple downhills, and one of those downhills occurred on a mile-long piece of road that was dug up for resurfacing (we were riding on dirt). The continual climb led to the north shore of Lake Waramaug, 50 miles from the start and the site of station 3. 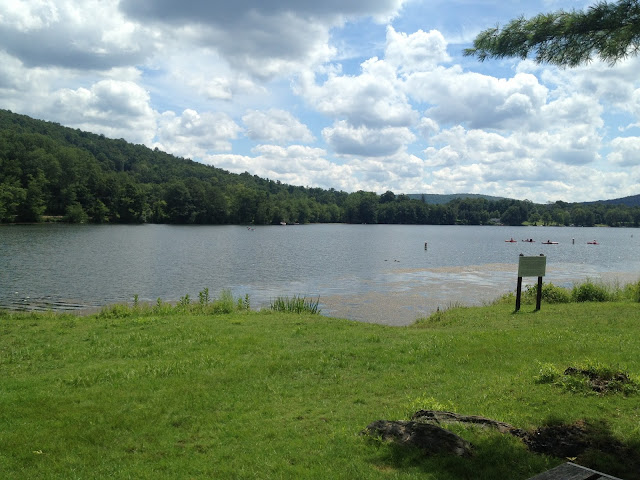 I have to say if this station served hot dogs and potato salad I would be hitching a ride to the finish line. My legs felt pretty much spent. Also at this point my stomach was telling me to stop sending solid stuff its way. You're supposed to be constantly snacking on stuff on long rides but the stomach was issuing a veto. I didn't feel like throwing up, I just felt like it wasn't a good idea to shove something down my gullet. This would likely hose me as far as energy levels go the rest of the ride.

Mercifully the fourth segment was mostly downhill or flat to the next station at the 69th mile. No more food but I did switch over from water to this magical, pee-colored elixir known as Gatorade. I felt like I had a little more life in my legs leaving this station.

Even more mercifully the next station was less than ten miles away at the 78th mile. During this segment there were a few muscles threatening to lock up. If I had to jerk my legs in any motion that they hadn't already been doing the past 78 miles then a muscle was going to lock up and one of the SAG vehicles would be extricating me from my bike on the side of the road somewhere and hauling me back. At the 6th station I took in electrolyte tablets and noticed that it hurt to breath and swallow. Awesome.

Somewhere after the 80th mile somebody installed a terrible, morale-killing hill on the route. Thank you not for that.

The last aid station, number 7, was at the 93rd mile. I'm going to be honest, I barely remember being at this station.

The last 14 miles to the finish were mostly flat and I was mostly alone. I had begun to wonder if I was so slow that they rolled everything up and put it away but that went away as I hit the finish line – to the cheers of strangers (which, I have to admit, was pretty nice) as well to the cheers of family and Lori (also pretty nice). 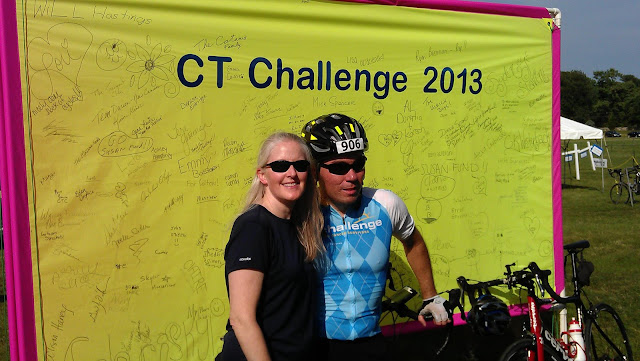 Looking back at it less than a week later I feel like I'm talking about somebody else who did that ride. I don't know if it was the ride itself or more the surreal timing of the ride with the news of Lori's diagnosis.

In any event I am thankful for many things:


I will most likely give this ride a try again. I don't feel like I rode my best due to the nutritional issues I had the second half of the ride (I wonder if I kicked up some GERD the night before) and the fact that I did my "long" training ride maybe too soon before the event.

For those that like to see data and maps and such things you can get a nerds-eye view of the ride here.
Posted by Michael at 4:45 PM No comments:
Labels: cycling, life
Newer Posts Older Posts Home
Subscribe to: Posts (Atom)